Viseu and this region is known as Lands of Viriato – Terras de Viriato. Viriato was one of the leaders of the Lusitanian tribe who faced the Romans in the Iberian Peninsula. 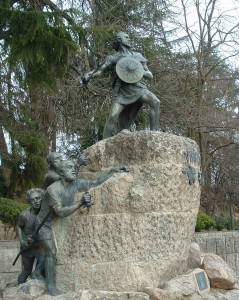 Little is known about the life of Viriato. Nothing is known of his date of birth or the exact place where he was born and the only reference to the location of his native tribe was taken by Greek historian Diodorus of Sicily who claims he was of the Lusitanian tribes.

Viriato belongs to the class of warriors, the occupation of the elite, the ruling minority. He was known to the Romans as the Duke’s army Lusitano, as adsertor (guard) of Hispania or as imperator probably the Confederation of the Lusitanian tribes and Celtiberas.

The Lusitanian Viriato honored with the titles of Benefactor, (Greek: evergetes), 17 and Savior, (Greek: soter), 18 the same honorifics used by the kings of the Ptolemaic dynasty.

He was described as a man who followed the principles of honesty and fair dealing and was recognized for being accurate and true to his word in treaties and alliances that fez.5 Diodorus said that the general opinion was that he had been the most beloved of all Lusitanian leaders.