In 140 BC Viriato inflict a decisive defeat to Fabius Maximus Servilliano, new consul, when they died in combat about 3000 Romans. Servilliano can sustain life offering promises and guarantees the autonomy of the Lusitanian Viriato and decides not to kill him. Once in Rome the news of this treaty, it was considered demeaning to the Roman grandeur and the Senate goes back, declaring war against the Lusitanian. 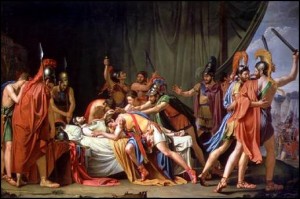 The death of Viriato of José de Madrazo

Viriato, described as a shepherd and hunter of Lusitania was elected head of the Lusitanian. After defending victoriously its mountains, Viriato threw himself decidedly an offensive war. Enter triumphant in Hispania Citerior, Roman division of the Iberian Peninsula in two provinces, Citerior and Ulterior, separated by a line perpendicular to the Ebro river and passing by Castulonensis saltus (now Sierra Morena, Spain), and launches contributions on cities recognize the government of Rome. Two types of war were attributed to Viriato, bellum, when he used a regular army, and latrocinium, when the fighting involved small groups of warriors and the use of tactics guerrilha. For many authors, Viriato is seen as the model of the guerrilla.

In 147 BC opposes the surrender of the Lusitanian Caio Vetílio that would have surrounded the valley of Betis in Turdetania. Later defeat the Romans in the gorge of Ronda, which separates the coastal plain of the Guadalquivir in Andalusia, where he would kill the Vetílio own. Later, another victory against the forces of Gaius Plautius, taking Segóbriga and Claudio Unimano forces, in 146 BC, was the governor of Hispania Citerior. The following year the Viriato troops back to defeat the Romans led by Caio Nigidius.

Later that year, Fabius Maximus, brother of Scipio Africanus, is appointed consul of Hispania Citerior and charge of the campaign against Viriato being you, for this, provided two legions. After some defeats, Viriato can recover, and 143 BC back to defeat the Romans, pushing them to Cordoba. At the same time, the celtibéricas troops rebelled against the Romans starting a fight that ended around 133 BC with the fall of Numantia.

Thus, Rome sends new general, Servílio Scipio, who had the support of troops from Popílio Lenas. This renewed fighting with Viriato, but this keeps military superiority and force him to seek a new peace. Send in the process, three commissioners of his confidence, Audas, Ditalco and Minuros. Scipio resorted to bribery of fellow Viriato, who killed the big boss in his sleep. A tragic end to Viriato and the Lusitanian, and shameful to Rome, superpower of the time, and who called harbinger of civilization.

Rome reaches compromise with Viriato, almost recognizing as sovereign, however, betrayal, compactuou with three of his allies to the murdered. Years before, the Roman general Sergio Galba almost decimates Lusitanian, and Viriato was one who escaped. The historian Strabo thus defined the Lusitania: “The most powerful of the Hispania of nations, that of all, longer stopped the Roman arms.” However, Nor could the Romans rely on the submission of the peoples of the Iberian Peninsula that were forced to keep the country under strict military occupation, and then came the first standing armies of Rome. Forty thousand men remained in the Iberian Peninsula in standing guard.

Without the strong resistance of Viriato, Decius Junius Brutus could march to the northeast of the peninsula, across the Douro river overwhelming Galicia. Julius Caesar still ruled the territory (now Galécia) for a while.