The Viseu Cathedral is the began to take shape in the twelfth century, right in the reign of King Afonso Henriques, driven by Bishop Odório. Then comes the construction of a cathedral in the Romanesque style. Although very little remains of this building, some authors classified a capital, vegan, datable from the late twelfth century and a lateral portal (south) of the next century – which now gives access to the cloister – as likely elements of the original building.

The place where the Viseu Cathedral was established in the late Middle Ages, was the target of excavations conducted by Inês Vaz, with the episcopal palace, which reveal a primitive temple, apparently triple apse, datable the Swabian-Visigoth period. In the process of Reconquista, have existed in this place two episcopal buildings, especially the tenth century, when Viseu was considered the capital of the vast territory between Mondego and Douro.

In the reign of King Dinis, and the city reached a golden age, it will result in a deep renovation of the building, even in the thirteenth century, under the jurisdiction of Bishop Egas. However, the 1383-1385 crisis was harmful to the works, and these terrified until after the crisis. Then, under the umbrella of the new Bishop John Vincent, the works would last for many years. 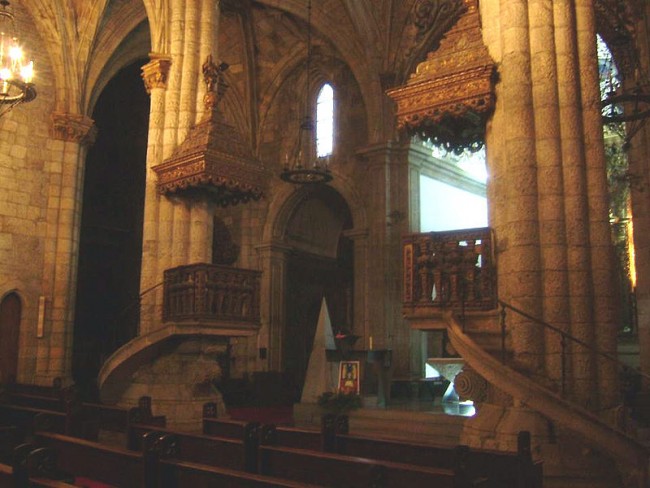 The Gothic Cathedral Viseense followed the original lines, with a body of three naves and three sections, thus bringing up a Romanesque more than gothic, typically spacious. Another inherent peculiarity is the fact that the monumentality of this cathedral has been obtained by the strength of its walls-walls.